I can't find another thread on this, but the format has been announced.

Group stages are an EPL B team, plus either 2 L1 1 L2 or 1 L1 2L2 teams, regionalised. With the EPL B team getting one home game at their main ground.

The round dates from the third group match onwards are all after FA Cup weekend up until the Trophy Final, so as unpopular as this competition is already, fans will be expected to buy tickets to both the FA Cup and the Trophy in the same week (assuming we progress past the trophy group stage / FA Cup 1st round).

Also interesting that the EPL B teams don't get to keep all of their revenue share in the competition, it goes into a fund to be shared out equally between all L1 and L2 clubs.
Top

I do genuinely believe that this is the 'foot in the door' the Premier League needs to start the process to get B Teams into the League.

Although it is not helpful to OUFC, the only way to show the League that we will not stand for such nonsense is to boycott this tournament or, at the very least, the B Team games.

Hopefully, this should not be too difficult to organise as not many people turn up for this tournament unless it's Sw**don or the later rounds anyway!
Top 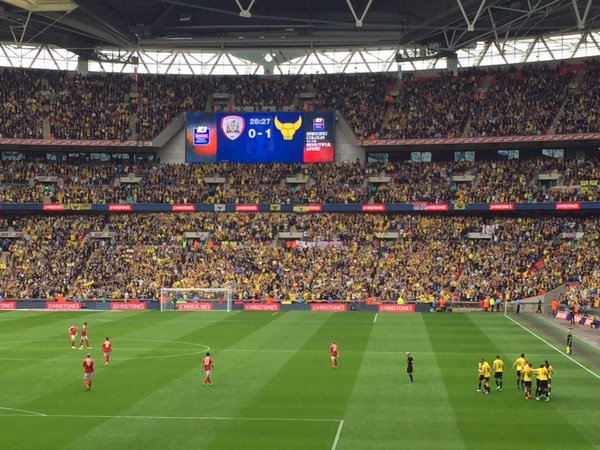 Oxford United are 90 minutes from another Wembley appearance.
The U's defeated a good Bradford City team 2-1 thanks to Chris Maguire (pen) and a Marvin Johnson thunderbolt
and will play either Yeovil Town or Luton Town away in the semi final.
Top

This post by an Oxford fan is excellent, and beautifully sets out why Oxford fans should stay strong and not let up on the #BTeamBoycott. The ending is particularly strong:

They’re relying on us finally admitting defeat and coming crawling back into the fold until eventually nobody can remember a time when the b-teams weren’t in the EFL Trophy.

And that’s when the new Football League restructure proposals will come out.

And that’s when the fuckers have got us.

Stay strong, brothers and sisters – this is way more important than a day out at Wembley Stadium.

The final is the most important game to boycott because it will send the strongest message that we will not put up with the bollox that the PL and EFL try to throw at us.
Top

Far from a given that we'll make it, but it does give a nice easy calculation for the level of the boycott (i.e. however many we got to wembley last year - however many we get this year) which potentially makes it a powerful statement, in either direction.
The problem is that all the U-21 sides are now out, so it looks like a normal competition which may well be reason enough for people to drop the boycott. I won't be going though and I went last season.
Top

Whilst this may be true superficially:

Isaac wrote:...all the U-21 sides are now out, so it looks like a normal competition

...this for me is the telling part:

As you rightly point out, if we get to the final then Oxford United fans could hold a huge influence on showing Mr Harvey and his colleagues at the Football League just how unpopular the changes are. It'd hurt all of us to miss a Wembley final, but just imagine the message it'd send if only a few hundred showed up rather than the 30,000 or so who went last year. All the marketing and PR spin in the world couldn't disguise the fact that the new format was abhorred by the fans.
Top

Given 2000 were there last night - approx 25% of our usual support, then a very basic calculation means that (assume all of these would go to Wembley, plus however many similar minded friends/family) 7500 will turn up.

The danger is, if, say, Coventry get there too then that is a very well supported club who have not been to Wembley for a long time, so are likely to bring a lot of fans. It is not unreasonable to see the final attendance being comparable, or actually better than recent seasons (35000 in 2014, 43000 in 2013).
Top

To miss Wembley would be cutting off your nose to spite your face. I don't believe a big crowd at Wembley will play a part in deciding what to do next with the trophy aside from aiding in a discussion about whether we should keep it going at all, which I think we should as it gives the fringe players for us a good run out and we have used it two seasons in a row now to build momentum and last year it helped us get promoted.

The clubs are very unlikely to vote for U21 sides again and the EFL will know they have been made to look like a laughing stock with some of the crowds this season.

It will be a great day out with the family and if against Coventry a really big crowd and a great atmosphere - as with last year it wouldn't matter if we won or not because no-one cares that much about it, it's not a major trophy. However, the players clearly care and want to win at Wembley and as a supporter of OUFC I would want to reward their effort in getting behind them. Not going would hurt the club more than anything else, and with the amount of debt we're in not making Wembley the pay day it should be seems a bit daft to me.

MK would have been the game to boycott more than this one but we took 4000 there and I would imagine most the day trippers would not give a monkeys about the experimentation with U21 teams and I would guess we would take at least 25,000. But if you want to do some gardening/get dragged round the shops rather than see Oxford possibly win a trophy at Wembley in front of possibly the largest crowd in decades then it's up to you!

Bet we lose the semi final now though.
Top

I never said the club shouldn't try and win the trophy, Ty. They should try and win every game they play.

Regarding hurting the club, it very much depends whether you think U21 premier league clubs in a "successful" (as demonstrated by a 70000 crowd in the final) Football trophy are seen to justify U21 premier league clubs appearing in league 1/2?
I'd suggest it does and if so, I'd argue that u21 clubs in effectively a feeder/reserve league 1/2 would very much harm OUFC. Therefore boycotting is the course of action that least harms our club and lower league football in general.

as an aside, does anyone know how much of the wembley ticket price the club gets?
Top

Isaac wrote:Given 2000 were there last night - approx 25% of our usual support, then a very basic calculation means that (assume all of these would go to Wembley, plus however many similar minded friends/family) 7500 will turn up.

Eh? What an odd calculation basis to use. At the same stage of the competition last season, our attendace against Yeovil at home was 2,532, so last night was about 20% down on that. Which would imply that we'd take about 25,000 this year.

But of course there are very many factors for how many we'd take to Wembley if we got there again (including plenty who wouldn't feel the need having been last year to watch us lose).

How many fans are actually boycotting these matches? By which I mean people who attended them regularly previously (not just Slumdon at home), who have deliberately not gone this year? Judging by attendances so far, about 500 to 1,000 I'd say. Which isn't going to make much of a dent in a Wembley crowd...

And personally I quite like the Football League Trophy, but I think the structure is wrong and there's too many games. They'd be better playing it as a shorter, straight knockout tournament starting around now, as most clubs (not us, obviously!!) have been knocked out of the major cup competitions and therefore might be more willing to put stronger teams out.
Top
Post Reply
181 posts

Users browsing this forum: No registered users and 25 guests